There’s this song I’m in love with.

From the first time I heard it, it was like love at first sight–it made me catch my breath, but I just knew this song was going to be my jam and have had it on repeat.

At first, I was thrown off because I didn’t think it fit into the genre of music I typically like listening to. But as I began telling people about it, I realized it’s exactly the kind of music that I love and need in my life. The kind that speaks deeply to my soul, something I can really jam to and reminds me to not take life so seriously.

A few months ago, I added it to my ever-growing Spotify playlist of songs I like listening to on repeat. I’ll listen to it throughout the day, so when I get in my car, good music automatically plays or when I’m at work trying to work through a project. As soon as I hear the introduction to the song, my mind is set at ease. It’s as if the song was written specifically for me.

I’ve always said music is one of my love languages (like sarcasm–in addition to the love languages identified by Gary Chapman). I’m not sure how it came to be like that, but I don’t know what my life would be like without it. I think it was some years in between middle school and high school, when I had a lot of feelings I didn’t know how to express. Music swooped in and rescued me. I could listen to a song, and it could say exactly how I was feeling.

I fall in love with life over and over again because of music. It’s something special no one will ever be able to take away from me. I think it allows me to have a deep connection with my life and sometimes even the people in it. 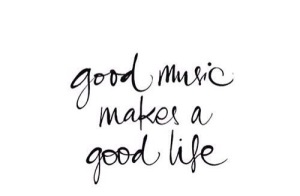 Has there ever been a song that you heard that made you stop whatever you were doing and listen to it?